Pu-erh tea: What is it, how is it produced and how to drink it 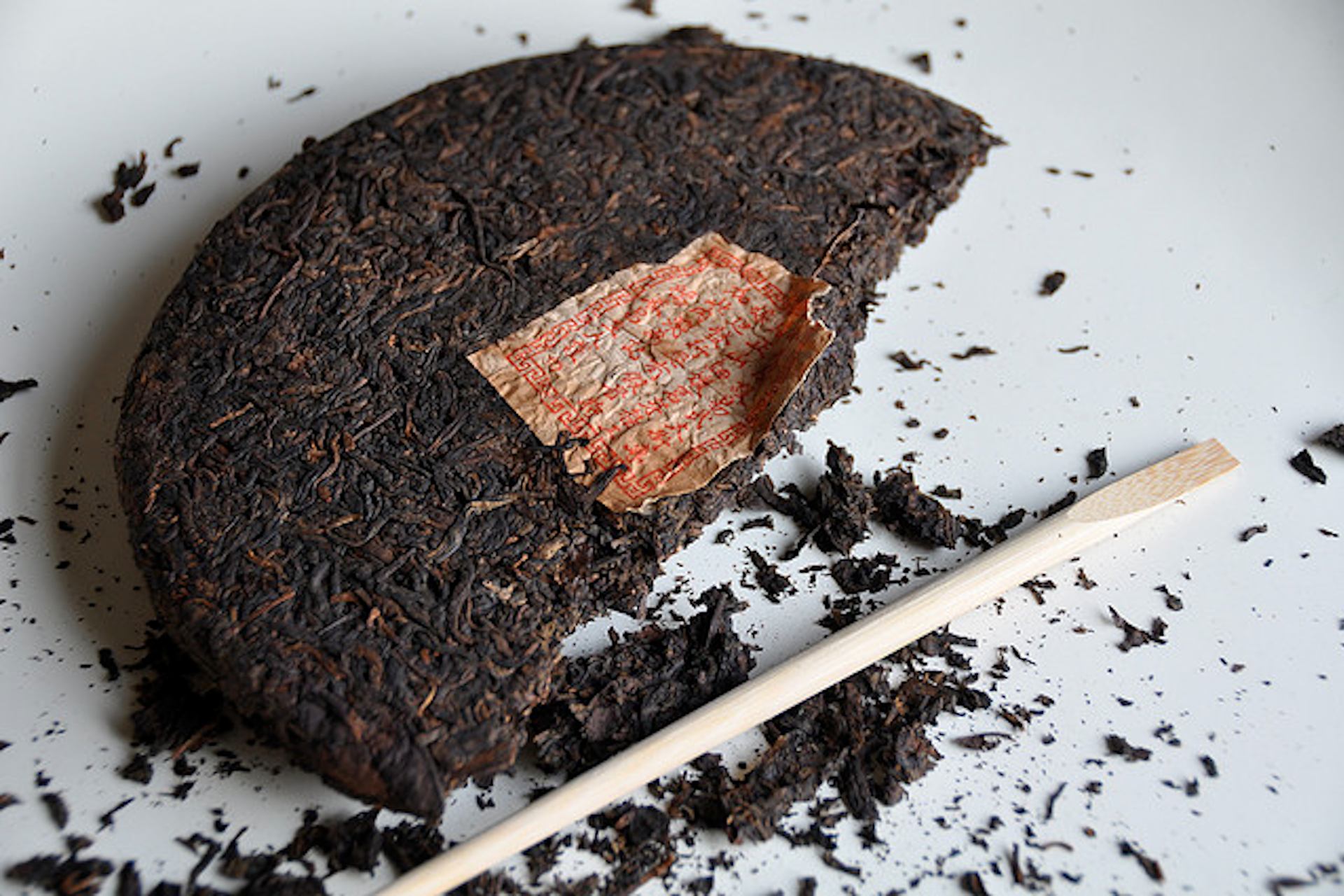 While aged wine and food is something that has been trusted, loved and highly paid for for many centuries now, aged tea is something unheard of for many people. However, aging tea has been a method performed for thousands of years in China and something that many tea drinkers devote to and adore. This type of tea is called Pu-erh (pronounced poo-air) and it is a type of fermented and aged dark tea produced in Yunnan province, China.

Pu-erh tea is not your typical cup of tea. It doesn’t have a fresh and light flavor to offer. Instead, it yields a deeper, more complex and mature flavor and often carries a very high price. Many of you will even wonder how can tea be aged anyway. Usually tea would get stale and tasteless after a while. That doesn’t happen with pu-erh tea though, a tea that has some passionate followers and even investors gambling on it.

What is the big deal with pu-erh anyway? What is it exactly, how is it produced and how can you drink it?

In this post, you will learn everything about this treasured Chinese tea.

Pu-erh tea originated in the Yunnan province of China where the tea plants have large, soft leaves spaced far apart on large, tough stems. The history of Pu-Erh Tea can be traced back to the 7th century, with the darkening and compressing of tea leaves for export to other nations and it is named after the town from which it was originally sold en route to other countries (Pu’er City) . In need of a tea that would not spoil and could be transported more easily, different methods of fermentation and compressed shapes were adopted and evolved.

In 1391 during the Ming Dynasty, the first Ming Emperor ordered that all moon-shaped, compressed tea  is abolished and only loose leaf tea is permitted since its manufacture was time consuming. The Ming Dynasty scholar Zhao Yuan wrote that Pu Cha was already very popular and everyone drank it regardless of class.

Pu-Erh tea was consumed by many emperors for longevity and the health properties it offered. During the Qing Dynasty, Pu-Erh tea from Simao in Yunnan became a tribute tea by order of Yongzheng, the second Qing Emperor. In the tribute custom, the Emperor would select tea regions to produce tea to be offered as a gift to the royal court, which was a great honor and good for business. The last Qing Emperor Fu Yi and the last emperor in China’s history said “Drink Loong Jien (Dragon Well Green Tea) in summer and Pu-Erh in winter.  Drinking Pu-Erh Tea is like being a member of the Royal Family”.

In 1879, the British and French, forever in their quest for black tea, set up customs offices in Simao. Tea export increased and the ancient remains of the famous Pu-Erh Tea Horse Roads which radiated throughout Asia, carrying the horses and tea caravans are a national heritage.

Pu-erh has been aged for many years. The aging process results in a slow fermentation, and it can take about 15 years for a ‘raw’ (unfermented) pu-erh to get the desired dark color and flavor. In 1973 a new stype of pu-erh was created by the Kumming Tea Factory. The process involves an expedited fermentation into “ripe” Shu Cha which is then stored loose or pressed into various shapes.

Shu cha processing led to a pu-erh investment ‘bubble’ in the 1990s and 2000s, during which, many imitation pu-erh teas were made with tea leaves that didn’t originate from Yunnan. Prices of pu-erh skyrocketed, many collectors started storing their aged pu-erhs and the quality of new pu-erhs plunged while production ramped up to try to meet demand. Fortunately, after the collapse of the pu-erh bubble production of pu-erh has more or less come back to normal.

Pu-erh tea is made only from the large-leaf subspecies Camellia sinensis var. assamica, grown in Yunnan Province in southwest China close to the borders with Laos and Burma. Depending on the way of process, there are two completely different categories of pu-erh:  green/raw pu-erh (生普, sheng cha) and dark/ripe pu-erh (熟普, shu cha). Usually tea beginners appreciate ripe pu-erh tea more while the experts and collectors appreciate raw pu-erh tea better.

First, the appropriate leaves are carefully plucked to prevent bruising. The leaves can be sometimes withered after picking depending on the tea processor by being spread out in the sun or in a ventilated room. Then the leaves are minimally processed into Maocha to prevent spoiling. In this stage the leaves are dry roasted to inactivate enzymes in a large wok, then rolled and shaped into strands and then dried in the sun. The killing of the enzymes leads to a mild oxidation of the leaves which contributes to the unique characteristics of pu-erh tea.

After drying, maocha can be pressed into raw pu’er, or it can undergo a fermentation process to make ripened pu’erh. Maocha is sold either as loose-leaf “raw” Sheng Cha or it can be matured in loose leaf form in controlled heat and humidity to smooth out the tea’s rough edges. Then it can be pressed into numerous shapes and sold as a more matured “raw” Sheng Cha which yields a darker brew with a more woodsy, earthy flavor.

“Ripened” Shu Cha tea is pressed maocha that has undergone a process also known as “cooking” in order to imitate the deep, dark color and flavor of aged “raw” Sheng Cha which can take decades to achieve. This shortcut method was developed in the 1970s by the Menghai Tea Factory and the Kunming Tea Factory and it involves piling and dampening of dried leaves in rooms where they are left for months to compost in heat and humidity. Shou pu-erh is usually made with lower grade tea leaves and offers a less complex flavor than aged sheng pu-erh which justifies it’s cheaper price. That is why it is not as expensive as sheng pu-erh.

After processing, both sheng cha and shu cha varieties, can be sold in the form of loose leaves or compressed into various shapes, such as:

After forming, the tea is stored in moist and warm cellars to further mature the tea overtime.

How to Drink Pu-erh

To break up compressed puerh, you can use a pu-erh knife or another small knife. Slip the knife gently in between a few larger leaves and work it in gradually as you go, rocking it up and down. You may need to use force if the tea is highly compressed. Make sure you store your pu-erh in an airtight tea tin.

Once the leaves are ready for steeping, some prefer to “rinse” them for several reasons (this step is optional):
-To remove any tiny particles of tea that may have been broken up during fermentation or while breaking the tea apart.
-To remove any dust that may have accumulated during the aging process.
-To prepare the brewing vessel for brewing by warming it.
-To ‘awaken’ the tea.

You can rinse your pu-erh by placing the tea leaves in a brewing vessel, pouring hot water (but not boiling) over them and  quickly discarding the water.

Generally Shou pu-erh is prepared with very hot water (near boiling or boiling). You can steep it for a short period of time (a few seconds) or longer (up to 7 minutes), depending on your personal preferences. Quality pu-erh teas can be brewed multiple times but you may want to increase the steeping time in later infusions for more intense flavor.

Sheng pu-erh is usually, better when prepared with a slightly lower water temperature and with a shorter steeping time (4 minutes maximum). Sheng is great to prepare in a yixing pot. It is also great when made in a gaiwan. If you brew with a yixing teapot, it is suggested to pour hot water over the teapot before you pour water over the tealeaves and after you put the lid back on the pot. This way the clay and the brew will be kept hotter, creating a more richly flavored drink.Ready to explore pu-erh tea? For beginners, I suggest trying these pu-erh pearls by Adagio teas which consist of compressed fermented five year old shou style pu erh leaves.For Sheng cha, I suggest you try 2012 Dragon Year Memento Old Tree Raw Chen Sheng Pu-erh cake. Remember it takes years of experimentation to discover the world of pu-erh. Be open minded and try different kinds!